Bombay Field Day on the benefits of biodiversity on farms

Early on Sunday 31 July, 32 Landcare members braved the cool and cloudy conditions for a ‘Woodland Birds and Farm Dams’ field day in Bombay. The event, kindly hosted by Bombay and Upper Shoalhaven Landcare, was all about the benefits of promoting biodiversity on your property, featuring guest speakers from Local Land Services (LLS) and The Australian National University (ANU) Sustainable Farms team.

Andy Taylor, Senior Natural Resource Management Advisor from Braidwood LLS, led the group on a stroll through patches of remnant eucalypt woodland to observe local bird life. Spotted alongside the familiar wood ducks, rosellas, and wrens, were three sightings of the male Scarlet Robin (Petroica boodang – pictured). This vulnerable little bird is the flagship species for LLS’s Save Our Scarlet Robin Program, which has helped fund fences and native plants to protect and revegetate over 500 hectares in the region, with the aim of increasing habitat connectivity for a range of threatened woodland birds.

The sightings at Sunday’s field day show promising signs for the Scarlet Robin, with many pairs reported by Bombay Landcare members along the river corridor this winter. Sadly, much of its preferred habitat – dry eucalypt woodlands, usually with shrubs and an open, grassy understorey – were damaged in the Black Summer bushfires. However, at the site visited on Sunday, post-fire plantings to improve the density of mid-storey shrubs are doing well, and will grow to provide cover for small birds from predators like currawongs, as well as forage and nesting habitat. 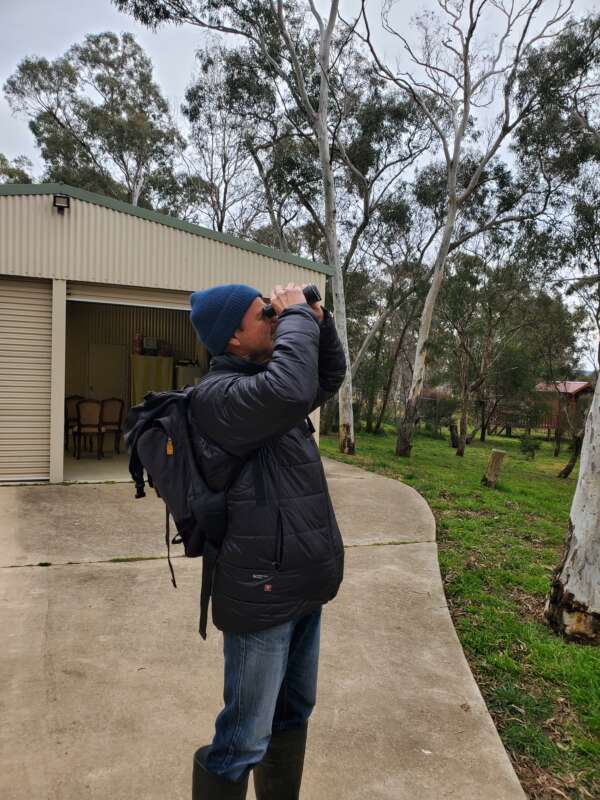 Andy outlined that, while the Save Our Scarlet Robin Program transitions to the next phase of monitoring established sites, landowners can continue to seek advice from LLS on their own protection and revegetation projects to promote habitat for woodland birds. He also highlighted the importance of citizen science, where landholders can record sightings of threatened birds on apps like eBird and Birdata. This data can help researchers evaluate population movements and, in the long term, potentially identify whether programs like the Scarlet Robin project are supporting a resurgence of threatened species.

After the bird walk, researchers from ANU’s Sustainable Farms took to the stage, leading Landcarers past two dam sites, one grazed and the other excluded from livestock. Richard Beggs, a Research and Extension Officer who’s done extensive monitoring on birds and dams in the Murray-Riverina region, as well as a PhD on native noisy miners in box-gum grassy woodland, pointed out valuable information on ways to improve the quality of dams for agricultural use, but also enhance them as an ecological resource to support biodiversity. 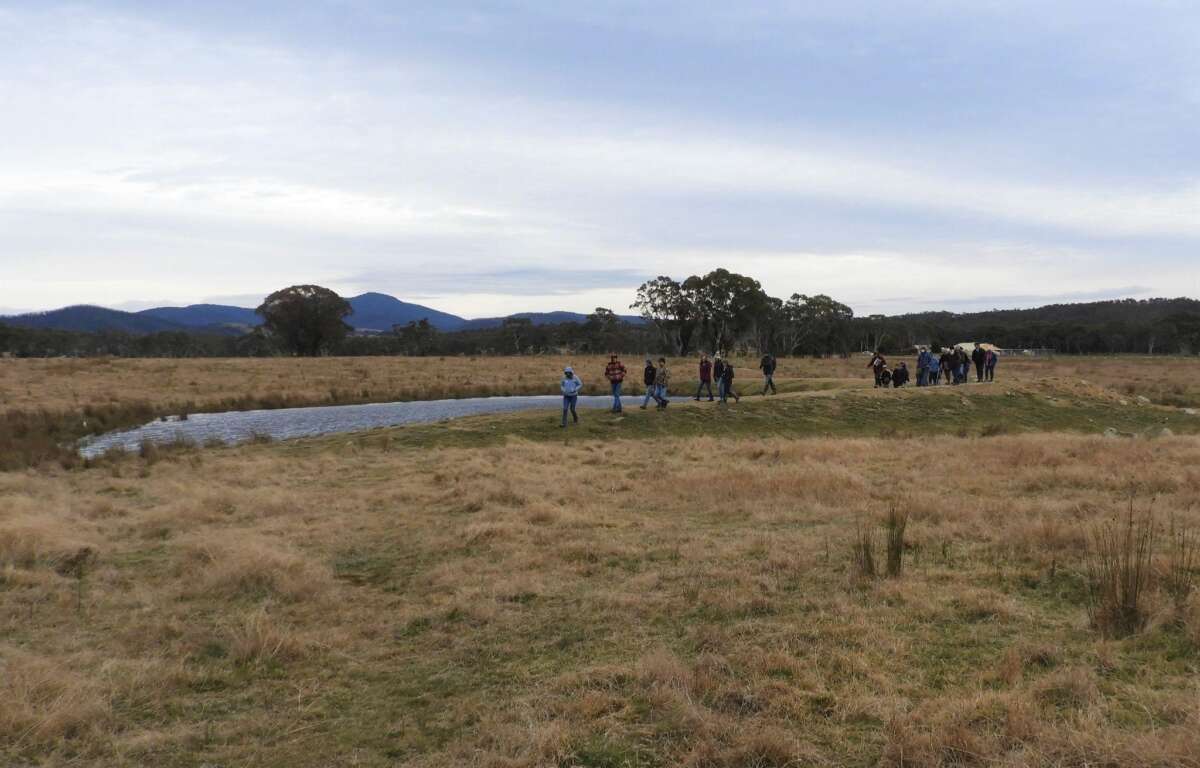 Michelle Young, Sustainable Farms Director, was also there to show the group some of the great resources the project has developed, including handy planting guides on what-to-plant-where around your dams. As an example, leaving old growth trees in the vicinity of the dam is highly beneficial (albeit not on, or right beside the dam wall as it can compromise its integrity). These trees offer an intricate habitat, decades advanced, and can help shade the water and prevent excessive evaporation during a hot summer. Similarly, having a healthy range of terrestrial and aquatic plants growing in and around the dam can help filter the water, improving its quality and the wellbeing and weight gain of the animals drinking it.

Given the vast majority of land use in Australia (>50%) is taken up by various agricultural pursuits, a powerful take home from Richard was the significant role farmland can play in striving for a balanced, productive, biodiverse, and resilient landscape. Enhancing your natural assets, even a simple farm dam, is a positive step forward.

Upper Shoalhaven Landcare would like to thank Andy Taylor, Richard Beggs, and  Michelle Young for sharing their expertise and joining the Bombay Landcare group for the day. We also wish to acknowledge Local Land Services for funding the event, and Vanessa Bunn, from Vanilla Catering, for saving the day by turning up with hot sausage rolls and soup in the gusty conditions on Sunday.

Biodiversity is vital to the functioning of any farming ecosystem. From natural pest control to water filtration, biodiversity provides many key ecosystem services. Enhancing natural assets can help improve biodiversity on the farm.

What to plant in and around your dam

Native vegetation in and around a farm dam has many benefits for water quality, farm productivity and biodiversity. This brochure provides guidance on the types of plants suitable for revegetating dams, and includes lists of recommended plants.